2900 Wilshire mixed used project is designed by LARGE Architect. The project is consisted of one 23 story concrete high-rise building in combination with 4 story wood over podium type VA construction and retail spaces on ground floor. This 1.4 million square feet project is planned for breaking ground in Feb 2018. The tower will be the home of more than 120-unit luxury apartment. To meet the high parking demand of the residences and retail shops, a 7-level parking garage consisted of 4 levels of subterranean parking levels with 350 parking spaces is designed under the podium of the structure.

Dr.Mehdizadeh were participated in the design of magnificent 2900 Wilshire Blvd project to ensure the resiliencly of building and applied state of the art techniques in structural analysis and design of this magnificent structure.

Gravity design of the structure:

The gravity design of the high-rise structure was a challenge for this project. The architectural aesthetic of the building enforced a challenging gravity system. In addition to very long span and thin slabs which were utilized to reduce the weight of the structure, the layout of the columns and the location of the main gravity system elements were not desirable from the structural engineering standpoint. Also, the slab systems design was very challenging due to the curvature and the shape of the building. All the post-tension elements needed to be curved and their elevation was varying in the slab system. The expansive balconies which were cantilever and the huge pool in the podium level increased the level of complexity of this project. Very heavy landscaping of the building on top of the podium structure required the usage of a very thick slab system. Post-tensioned slab for the upper floors was designed to carry the loads and transfer them to the columns and core walls with high strength low shrinkage concrete. Also, columns needed to be designed to carry thousands of kips of loads and transfer them to the pile foundation. Also, very high strength concrete was specified for the columns and the podium slab.

Lateral design of the structure:

The location of the structure was in the Los Angeles area, the safety of huge mega-structures with more than 5000 occupants against any earthquake event is a major concern of the public and government entities. To assure the safety of the structure, the advanced seismic design of buildings was utilized on the 2900 Wilshire project. For the seismic design of the project, we performed much more than the conventional design of the building specified by building code design. We used performance-based design to design this project.  Dr.Mehdizadeh has used its earthquake engineering background on the design of this structure to realistically estimate the response of the structure for a different level of earthquake intensities and consequently design the structure to meet the required performance. In addition to the conventional seismic design of the structure, various ground motions were selected and scaled to the target design spectrum of the project site conditioned on the probability of occurrence of each intensity. The ground motions were applied to the state of the art nonlinear finite element model developed specifically for earthquake studies of this project. At the end, design team were able to realistically measure the influence of seismic load on each element and design each element accordingly for a maximum level earthquake. Using this method will ensure that this this highrise remains completely serviceable without any damage in the event of earthquake with 50 year return period and it will remain safe for the maximum earthquake that the structure might experience during its life-span. 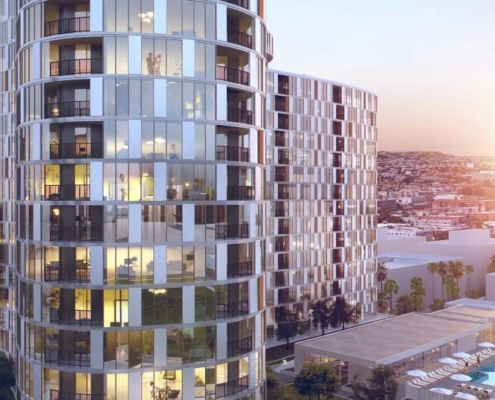 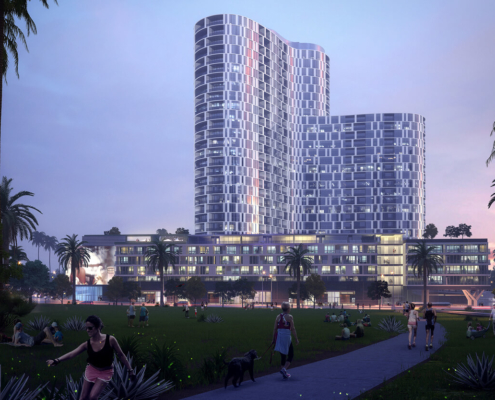 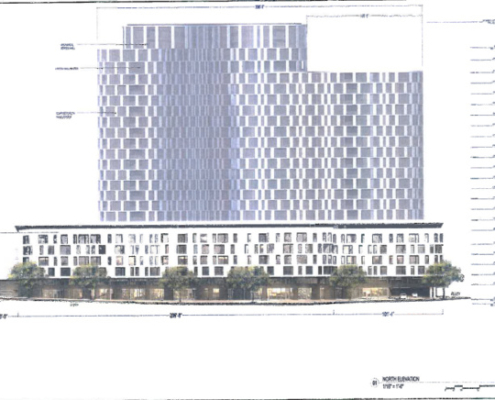